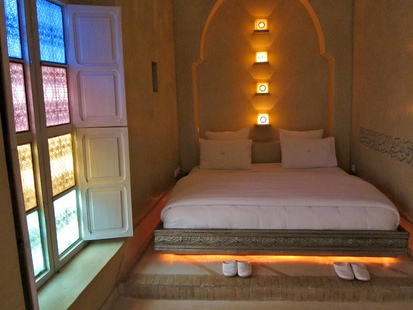 For our second anniversary, my husband Daniel and I traveled to Morocco. When I thought of Marrakech, my sense of adventure was courted by colorful images of the leather tanneries, the exotic fragrances of the spice bazaar and the elaborate adornments of the snake charmers and the water-bearers. So we decided to forgo an easy, risk-free stay in a massive, sterile chain hotel in Gueliz, the newer part of the city. Instead, we would stay in the midst of the magic and mayhem of the medina, the ancient walled quarter of old Marrakech.

We knew this would equate to a certain level of unease, a few forgone comforts and countless wrong turns as we tried to find our way through the narrow, mazelike streets where we would make our home away from home. But we were committed to finding a place that was steeped in the authentic essence of Morocco. And so began the search for the perfect, intimate local guesthouse, called a riad. After months of scrutinizing a never-ending lineup of charming little inns, I discovered it.

Riad AnaYela is an epic Moroccan romance written in silver and stone. It is a place with the kind of flawless integrity of detail that truly and irrevocably captures the imagination. We chose it for its ability to transport and indeed, passing through the heavy, iron-clad door from the dusty, bustling streets of the medina was something like stepping into another world entirely, and one that existed as a sanctuary for the senses.

I will never forget the feeling of stepping out of my wayworn shoes each evening and into the embroidered white leather babouches I was given upon check-in, the kiss of cool white stone grazing my feet. The very air of the riad seemed fresher, filled with the meditative chimes and soulful vibrato of dim, ambient soundscapes, though the ceiling of the central courtyard was open to the same sky that watched over the pandemonium I’d left outside. Candlelight stole through the intricately ornamented iron and glass facets of handcrafted lanterns to dance languidly across the still blue water of the plunge pool. The breeze-stirred rooftop deck was equipped with sunning chairs, tented tables and a far-reaching view over the rooftops of Marrakech. Above it all perched the magic carpet tower, a rich vermilion-curtained and velvet-cushioned lounging space that made the perfect retreat for lazy afternoons and romantic dinners.

When this 300-year-old home in the heart of the old city was renovated in 2007, the proprietors say that a scroll was unearthed from within a small room hidden behind a wall they removed. On it was written the tale of Yela, a girl who grew up in the house. AnaYela means “I am Yela,” and her story has been painted in flowing Arabic calligraphy across the ceilings and along the walls of her former home. Hammered into the silver panels that adorn the doors of the bedchambers, a piece of the story continues inside each of the rooms, which are referred to as chapters.

Our room, Chapter Three, was one of only five, and as lovingly executed as they come. The pure white bed on its wrought silver platform seemed to float above a restful pool of light. There were soft leather Berber cushions arrayed on a plush, hand-loomed rug. Past the lamplight-wreathed mirror and the engraved silver toiletry bottles, brick steps led up into a vast, sculptural monolith of a bathtub. More than 100 local artisans contributed to the creation of this lavish theatrical environment, each furnishing and embellishment crafted by hand, right down to every silver teapot, tasseled napkin ring and embossed toilet paper holder.

The staff was another of the riot of factors conspiring to give us suspicions that we’d been spirited away into a fairytale. Besides being elegantly costumed and genuinely gracious, they were ever at the ready to accomplish any of a number of miraculous feats. Not least of these was the timely presentation of a masterfully spiced apricot and chicken tagine, slow-cooked to perfection while we were out shopping ourselves famished in the souks. We were also given a house cell phone so that when we inevitably became impossibly lost and footsore in the labyrinth of the medina, we could call in for a rescue. We had access to an exclusive team of valiant drivers who were willing to navigate the impossible obstacle course of the narrow, serpentine alleyways where mere mortals dare not motor. Our brazen escorts would vie with brawling school children, ladies with breadbaskets balanced atop elegantly swathed heads, reckless mopeds and stray donkey carts, and they would do this just to retrieve and redeposit us whenever we wished to summon them.

AnaYela is not a flawless match for everyone. If you require copious amounts of space, there are establishments where you can preside over thrice the square footage of these quarters for a comparable price. Laundry service, wireless internet access and airport transportation are included here, but while there is a flat-screen in the lounge, you’ll find no trace of a television in your suite, no alarm clock and no ipod dock. Rooms on the first floor are highly recommended for those wary of the North African heat, because the chapters on the ground floor lack air conditioning. A sumptuous breakfast of yogurt, fruit, pastries, cheese and breads is part of the package, and the kitchen can turn out a serious multi-course spread for dinner upon request, but you’ll have to leave the legion of in-house restaurants, nightlife and 24-hour room service to the Sofitel. The magic here is in the mood, which manages to be both haute-bohemian and cozily authentic. If, above all, your goal is to immerse yourself in the unique sense of place that Marrakech exudes, then AnaYela may be just the narrative to get lost in.