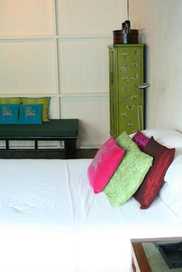 ​Daniel and I arrived on the island of Penang on an overcast afternoon during rainy season, stray sunbeams stealing listlessly through fantastical cloud formations. Our taxi driver had posted a prominently placed notice on the dashboard: “No durians allowed”. We had run across similar signage aboard Air Asia planes and in light rail cars across Kuala Lumpur, asking passengers to refrain from eating the popular but overwhelmingly pungent-smelling tropical fruits.

The “teksi” pilot had a punk rock hair style and a driving technique to match, weaving and lurching through the narrow streets of Georgetown like an angry hooligan, which is to say exactly like nearly every other driver we encountered in Malaysia. The vehicle shrieked to a harrowing stop in front of our antique Chinese shop house at 93 Armenian Street and we emerged into the soggy, leaden heat of the Southeast Asian air.

We stood before a curved row of two-storey structures, all meticulously restored historic shop houses in the center of the UNESCO World Heritage Site of old Georgetown. A young woman, one of the few Malaysians we met with little mastery of English, hurried across the street from the company’s retail outfit, Bon Ton The Shop. With a quiet smile, she unfastened the padlock from our ancient wooden double doors, handed us the key and disappeared.

Despite feeling inadequately welcomed, we were in absolute awe of our living quarters. We were standing inside of a perfectly preserved architectural relic of Penang’s storied past and at the same time wrapped in a striking interpretation of modern interior design. The stained concrete floors were adorned with soft, vibrantly hued rugs and arrayed with antique furniture that had been reupholstered in exuberant graphic fabrics. There was a bath tub constructed in the style of a wine barrel, an old fashioned pedestal sink and a jar full of freshly baked shortbread cookies.

Up a wooden staircase so steep it may as well have been a ladder, we found the air conditioned, if slightly crooked feeling bedroom and a second bathroom complete with a rain shower. Hand-painted wardrobes on either side of
the bed infused the sleeping area with vivid splashes of turquoise and lime, colors mirrored in the throw pillows
and the cushy shag area rug. The soulful strains of the muezzin’s call-to-prayer drifted in through stained glass windows from the mosque across the street. We were ready to buy the place.

As charmed as we were by our remarkable digs, we dropped our bags and headed out to find another, hopefully
less rowdy, taxi driver to deposit us near one of the many outdoor cooking enclaves that make up Penang’s legendary street food scene. We chose New World Park, a clean, covered pavilion with an open-air music stage,
a selection of shops and more than 25 outdoor food stalls.

We wandered down the line of counters, sniffing inquisitively and peering through clouds of aromatic steam to
​the many-colored edible treasures within. A wizened gyoza chef with smiling eyes explained how to place our orders, pay and then indicate to each cook the table where our dishes should be delivered once they had been prepared. We ordered a hefty plateful of his dumplings before visiting a soup stand, an eggroll expert and a bread vendor, then reported to our designated table to wait for our bounty. The damage? Less than 5 US dollars.

The pan-fried gyoza were supple and juicy, with rich pork filling and tender skins ever so slightly crisped at the edges. Our soup was a delicious variety of won ton mee, a Cantonese concoction bursting with a mountain of skinny egg noodles, barbecued pork and won ton dumplings in a hot, liberally spiced broth. The rolls, called popiah, were made of a fragrant mélange of turnip, jicama, green onions and other fresh vegetables encased in a flaky, pliant wheat wrap and served with a chili-infused, vinegary soy sauce for dipping.

And the bread! The bread was a simple but shining example of Malaysia’s characteristically high-contrast cuisine. It was a flawless rendition of the country’s finest and most beloved variety of doughy delight, roti canai. The buttery, many-layered pancake is delectably flaky but not brittle, remarkably elastic yet never rubbery, pleasingly understated without being bland. It is torn into bite-sized pieces and eaten with a diptych of rich, colorful curries, most often a sweet, golden lentil puree and a spicy, scarlet tomato sauce.

Savoring the last crumbs of our 5-star, $5 meal, Daniel and I were languorous with satisfaction and tropical heat. We lingered as the lanterns strung across the alley tops began to twinkle, rendered contemplative by contentment and the dreamlike quality of the twilight. Watching the indigo shadows deepen into dusk, it struck me that the atmosphere of Penang shares the chiaroscuro character of its culinary products. Both the island and its edibles are riotous and bold in sensory experience and yet somehow also tranquil, steeped in tradition but full of innovation, all at once awash with the exotic intrigue of the Far East and the unmistakable comfort of home. 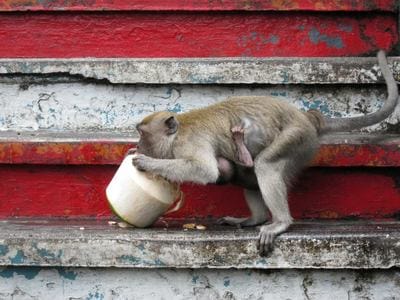 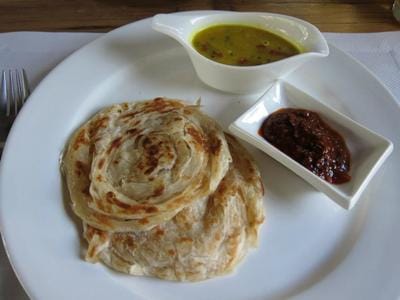 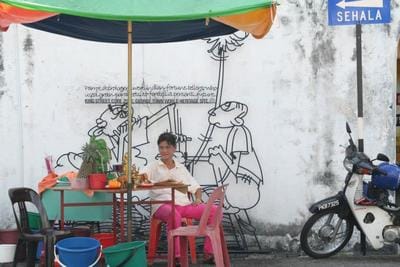